It seems like I haven't played Bushido in a really long time.  Which is true.  My D&D campaign dominates most of my spare time these days.  That campaign has allowed me completely unrestricted freedom in my creativity, and I'm discovering that I'm good at running power politics.  I think the real core of power politics is that most people just want power for its own sake.  They don't need any mad drive or reason behind it, they simply want it.  There are plenty of real world examples of this.

With everyone being stuck indoors for now, I've broken out the Bushido again and resolved to get my Jung Pirates fully painted as a faction - though I'm not sure I have all the models... I will check on this once everything I have is painted.  Tora and Jori are sitting on my table right now with the base coats all done.  I just spotted my metal Yuji as well.  Great.

The new Core cards to make up the faction decks to twenty cards each have presented the Jung with some interesting options, though the most important one is Knife.  This weapon is a game-changer for the Juhin: 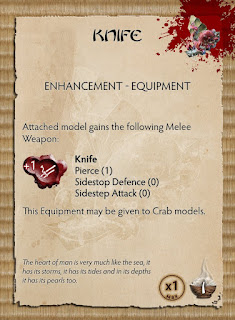 Another massively significant card is Attack from Above for the Decension.  Its applications are obvious.  You fly into melee, you hopefully murder something.

I really want to build a Pacifism-focused Decension warband, but I sold on my Decension a while ago.  It probably wouldn't be too much effort to get the warband in question, but I have plenty of models that need painting already and it would just be the single warband I would be getting.  I'm still thinking about getting a bakemono horde so that I have a fun option to play, especially against newer players.

Having written all that, I’ve just come up with an utterly disgusting Queen of the Waves warband.  If Ben can get a Vassal mod up and running, I think I’ll test it out.  The sheer amount of control it offers makes the samemiman a lot safer and easier to use than normal...  I’m missing one model from it, but that’s an easy obstacle to overcome.

Jim and I went down to the Battle Bunker in Sunderland to play in a Bushido tournament over the weekend.  It's about a 3 hour drive from Glasgow, but we're both thirsty for opponents who are Not-the-Other-Person of our duo.  The tournament used an usual sideboard format - basically everyone had access to the Ordered for Battle bonus in addition to whatever theme they picked.  This didn't change anything for Jim or myself as far as I'm aware.

The warband I used was just the ronin Ordered for Battle version of my Conclave of Captains warband:

Kami of the Morning Dew

Jim used Adam Cross' quad ninja warband.  The tournament was 3 rounds and a lot of fun.  The scenarios in round order were: the Idols, Seikyu, and Botoku.

All my games followed the same formula: play cautious on turn 1 as I have a big activation disadvantage.  Once Hiroto and Eldest Brother arrive via Flank I can really ramp up the aggression.  Use the Kami of Morning Dew and the Itsiro Crab Swarm to deal with anything really scary, and my kancho should be able to run around and pick their choice of targets.

No one exploited my lack of turn one activations, but the players at the tournament weren't experienced and this is a facet of the game that takes a little while to learn - I only really learned how to do it once I swapped over to Prefecture.

On the way home Jim and I discussed the way we play the game and who we play against, and I usually only get to play a warband I create about once, maybe twice, outside of a tournament.  This is because they turn out to be trauma inducing to play against - not something I want to subject beginners to while inducing them to Bushido.  To help alleviate this I've been thinking of getting a Bakemono Horde, it's a style of warband everyone can enjoy playing with/against: plenty of things die, and no one immediately feels overwhelmed playing against it (that may change through the course of the game as more and more bakemono start to appear though).
Posted by Andy Palmer 0 comments

I have begun to experiment heavily with the ronin options of Bushido.  Last night I tried out an Imperial March warband using the Sworn Sisters, Koshimori, and a Golden Sentinel.  To round things out I also brought along a playtest profile, and submitted my feedback for him: he needs a fairly hefty nerf and he's still amazing.

The Sworn Sisters were very interesting to use.  They bring such a wide array of options whether you're attacking or defending.  Yanjing may look the most threatening, but that's a lie.  Yizhi is the real danger.  Just when you thought you were fighting one of the Sworn Sisters, Yizhi is there giving out melee assist and activating Co-ordinated Attack.

I got a lot of enjoyment using the Sworn Sisters, but I don't know if Imperial March is the warband I should be catering to.  I'll stick with it for now, as it inspires me to get more painting done.  For alternative options, both the Jung and Prefecture bring something to the table.  I don't feel I'm really losing anything by using them in my Hare clan style warband, and I can field an entirely ronin Jung warband.

It's time to explore that skill ceiling.

This is a blog about my experiences with the miniatures skirmish game Bushido, created by GCT Studios.